Ecosystems: What my fish tank has to say about our forests 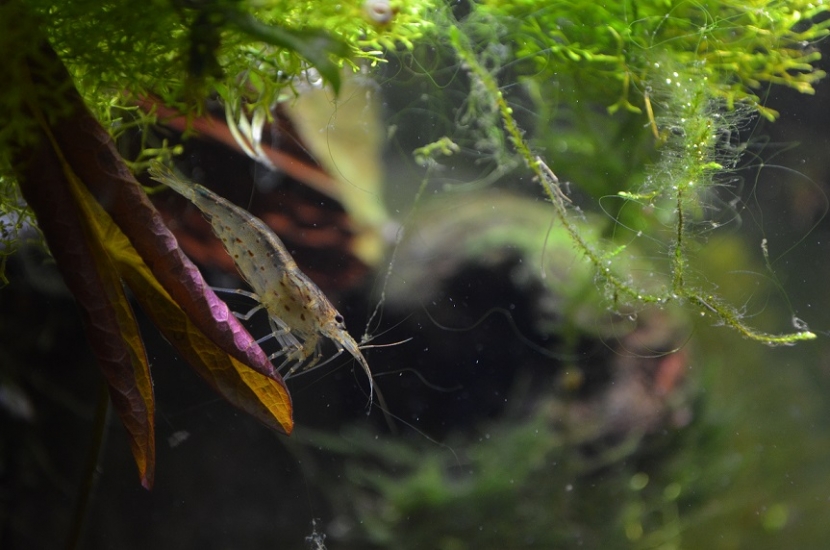 This freshwater shrimp is hard at work. (Photo: Abraham Ames)

My interest in creating a self-sustaining ecosystem recently led to me setting up my first real fish tank. I soon learned that 30 gallons, with only sunlight and fresh water as inputs, was not enough space to support the ecosystem I’d envisioned. Indeed, without adding fish food it would only support some slow-moving invertebrates.

A tank of snails and worms wasn’t exactly the dynamic which had enthused me. In nature, guppies and killifish might spend their whole lives in puddles… So why couldn’t fish, even very small ones, survive?

The base of my ecosystem’s food chain, like so many others, is plant and bacterial growth. I thought perhaps I could mono-crop algae, add plenty of light, one or two algae eating fish, and the quick-growing photosynthesizer could probably keep up with the grazing. But this system’s nutrients would, over time, become stuck in the fish. It’s just too small a space to contain the multiple generations of fauna necessary for the nutrient cycle to complete, and with no decomposers, the first dead fish might poison the rest as its nutrients return to the system all at once.

Alternatively, I could allow a variety of plants to grow, bloom, and decompose, which would support a population of invertebrates. But any fish that feeds off the snails, worms or little crustaceans would be so good at hunting them down that I could only imagine the invertebrates being too harried to accomplish their role of maintaining living and decomposing plant levels, and the tank would become imbalanced. It became clear that the complexity and success of my system would be limited by the amount of plant matter and number of invertebrates that could be sustained.

So how could I stretch this limitation to make my system succeed?

I learned that a key aspect regarding how much life and diversity my small space could support is the 3-dimensional surface area and the structure it creates. We terrestrial beings may see surface area as 2D, but we are in the minority.

A healthy system, I came to understand, would have plenty of space for primary producers (small, middle, and tall plants), but also create a habitat which allows lower-tiered consumers to proliferate with an acceptable amount of predation. The Goldilocks zone for sustaining a balanced population has at least something to do with the way a habitat is built.

As I worked on creating my 3-dimensional habitat, one thing that struck me (though it shouldn’t have) was how the fish immediately knew how to take advantage of the plants I added. Fish would search along leaves for little morsels, peer out from behind them, or hide in the vegetation’s shadows. Utilizing the structure of plants was very much (surprise surprise) in the fishes’ nature and brought out new and very sensible behaviors. 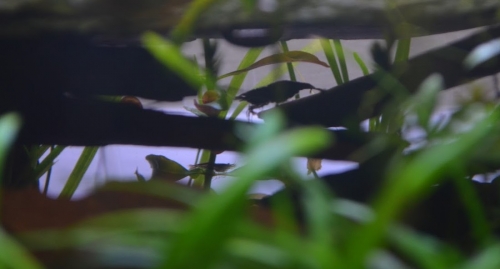 Seeing this elaborate game of cause and effect play out in my aquarium changed the way I look at forests. Vacuous, cathedral-like woods are a wonder in themselves, but now I also wonder: where’s the food? Unless they can climb or fly up to the canopy, our beloved woodland creatures will find very little to eat here. Insects, birds, and some small mammals can eke out a living high off the ground and provide a base for animals further up the food chain, but this structure would be similar to filling my tank with lily pads. The result would be loads of empty space, which for all intents and purposes doesn’t support life.

Now, when I look at a forest floor, dense, but not clogged with detritus and undergrowth, I think “wow, look at all that food and habitat!” An old field or clear cut, now growing in with bushes and filled with fallen limbs, may look to us like it’s seen better days, but to a rabbit or fox, it's paradise.

In a healthy forest, the decomposing woody snags and bushy green areas don’t just provide food for insects and herbivores. They are the physical structures in which our New England animals thrive. A wide-open forest can provide deer with a corridor of travel, but not food or cover. Smaller animals might successfully forage, but would be more open to predation. Conversely, overly dense invasive plants can create barriers which predators can’t breach, offering a breeding ground for rodents and, ultimately, an overabundance of ticks.

So why can fish survive in puddles in nature but not in my luxurious 30-gallon space? If my tank is any authority on the matter, the most important element which makes living systems successful in nature — but which I could not replicate — is their connection to other systems. The amount of vegetation which can grow in 30 gallons of water isn’t enough to support the cycles of diverse insect spawns which would provide a fish with enough consistent food to survive. I cannot connect mosquitoes, dragonflies, or caddisflies to my system. No ducks will ever come and replenish the nitrogen.

Within my tank, I can’t connect even one of the minutiae of interconnected webs which prop up our highly sophisticated natural ecosystems. Very few habitats will provide consistent food at all times. Having stability in one habitat when there is an imbalance in another can be essential to resilience. Isolating my ecosystem from a larger whole is more than enough to ensure its doom. 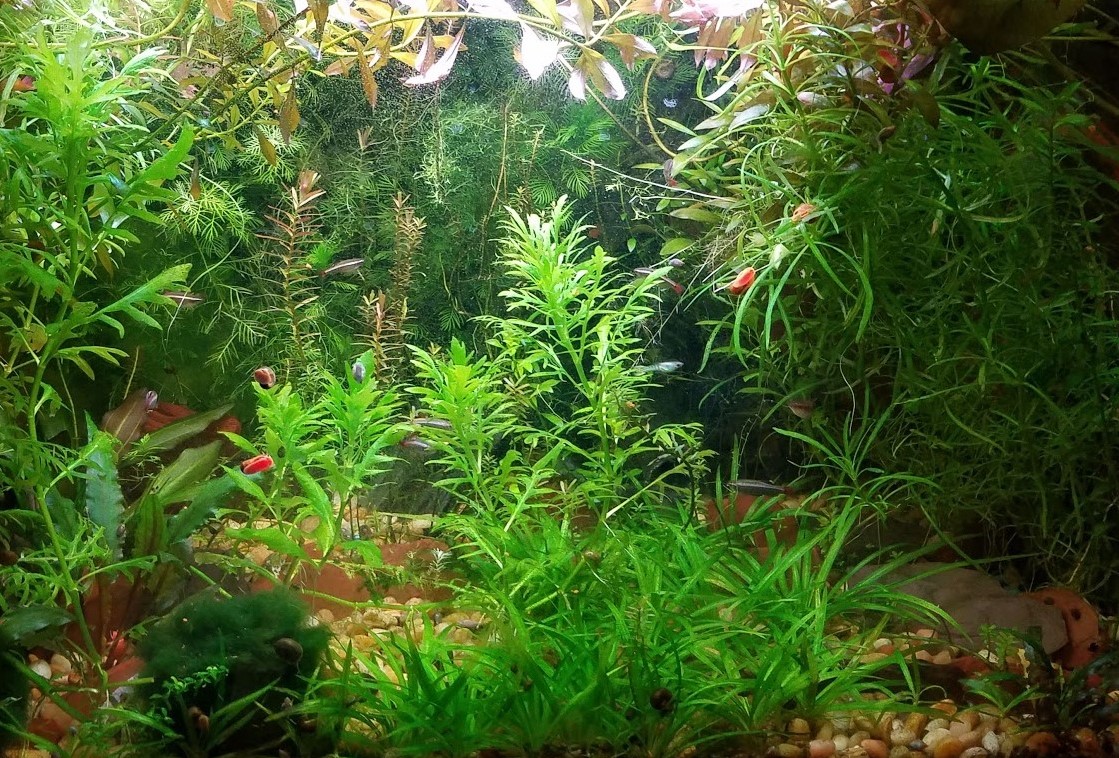 So what, other than more space, could make my original plan work? Ideally, I would want as many types of plants as could grow without outcompeting one another, with something blooming, growing, and decomposing at all times. I’d want as many types of micro and macroinvertebrates as could be supported. I’d want habitat/primary producer surface area on the bottom, middle and surface, and I’d want the structure of that habitat to be sparse enough to allow fish to forage, while also providing hiding and breeding space for whatever it is they are eating.

Finally, and perhaps most crucial to its longevity, I would want it to be connected to other systems, so excess nutrients can flow out, depleted ones can flow in, and so there’s a back-up supply of food in case my tank is either thrown out of balance or is otherwise not producing.

This connection to other systems, I learned, is what brings true resilience. Through this interdependence, ecosystems and the landscapes they create become more than the sum of just their own parts.

Even with a diversity of flora, fauna, and habitat structure, my system is too small to capture enough light energy to support anything as large as a fish. Now, I toss in some food every day and manually pull out vegetation when it gets overgrown. My tank has been accused of looking like a pond, but after what it’s taught me of how nature capitalizes on what we perceive as a “mess” — in water and in the woods — I take that as a high compliment. That absurdly sophisticated “mess” we see in nature is hard to re-create!  I’ve studied ecosystems by book and by observation, but playing with my own helped me see ponds and forests in a different light.

Abraham Ames is an Easement Stewart with the Forest Society.