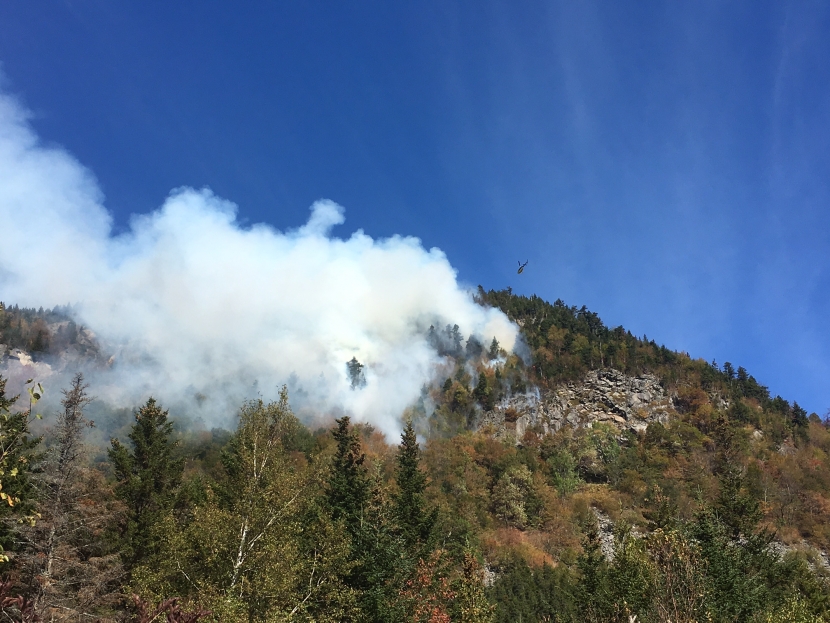 The Dilly Cliffs Fire soon after it was discovered the morning of Tuesday, October 3, on acres owned by the Forest Society as part of our oldest Forest Reservation. The fire, which crossed into the White Mountain National Forest spread to more than 70 acres, flared up within the interior area of the fire on Tues. Oct. 17.

On Tuesday, October 17th a hot spot flared up within the interior of the Dilly Fire area, sending a significant amount of smoke into the air and prompting several 911 calls. Firefighters from the Woodstock Fire Department and White Mountain National Forest are continuing to monitor the fire. Increased winds and warmer temperatures will continue to increase fire activity, resulting in hot spots and visible smoke.

The fire team managing the Dilly Fire in North Woodstock determined on Oct. 12 that the fire has been contained, and it is still contained as of Oct 18. The fire, first discovered on Oct 3 on the Dilly Cliffs high above the popular Lost River Gorge in North Woodstock, eventually spread to more than 70 acres, some owned by the Forest Society, some by the White Mountain National Forest.  Lost River Gorge is the Forest Society’s oldest forest reservation, acquired in 1912.  The Gorge and Boulder Caves attraction, which hosts thousands of visitors annually from May through October, is currently operated by White Mountains Attractions, which leases the property from the Forest Society.

Click here to read the Oct. 18 press release from the the White Mountain National Forest.

The team fighting the fire, including more than 100 firefighters on the ground and three helicopters dropping water from the air, established a fire line around the impacted area. Aided by favorable weather including heaving rain over Columbus Day weekend, the work of the fire fighting team has limited the fire's growth and intensity. However, it may take winter snows to comples Attractions to close Lost River Gorge and Boulder Caves to help the team contain the fire as soon as possible. 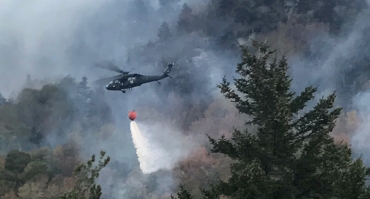 Firefighters called in helicopters to help contain the Dilly Cliffs fire due to the steep terrain.

"On behalf of the Forest Society, I would like to extend our appreciation to all the men and women engaged in fighting this fire," said Jane Difley, president/forester of the Society for the Protection of New Hampshire Forests. "This fire is located in very rugged terrain, making it particularly challenging to contain.  Thank you to all who rose to the challenge."

"The Forest Society is in close contact with the team now monitoring the fire," said Will Abbott, vice-president for policy and reservation stewardship at the Forest Society. "We are also in close contact with White Mountain Attractions, which operates Lost River Gorge.  We agreed to close for the season to provide the team fighting the fire as much space with as little interference as possible.  We all have an interest in containing the fire as rapidly as possible."

Hikers shold avoid trails in the immediate area. Check the White Mountain National Forest website for updated trail closure alerts. The Dilly Cliffs Trail on the Forest Society's land is impassable, and has been closed to hiking indefinitely.

Click here to read the Union Leader's coverage of the fire.