As the calendar page flipped to March, news from natural world includes early bird harbingers of Spring. Wildlife photographer and Forest Society Floodplain volunteer Ellen Kenny spotted her first Red-winged Blackbirds of the new year along the Merrimack River Floodplain on March 1 — right on time. Redwings had been spotted with Starlings and Grackles for several weeks in the Seacoast Region — even as snowfall and cold temperatures returned.

"Yesterday and today, robins were lining the side of the Millbrook, finding stuff to eat under the ice shelves, flapping and gossiping and having a grand time. I was trying to get a picture of one of the robin clusters this morning when suddenly the whole lot of them — probably around 40 birds, took off at once.  All except the one in the grip of this Coopers Hawk.  Yikes! Quite a different stream before and after —  the cozy Millbrook Spa with all of that splashing and chatter was silent. Nothing like a little life and death drama to get your brain going on a cold March morning…" 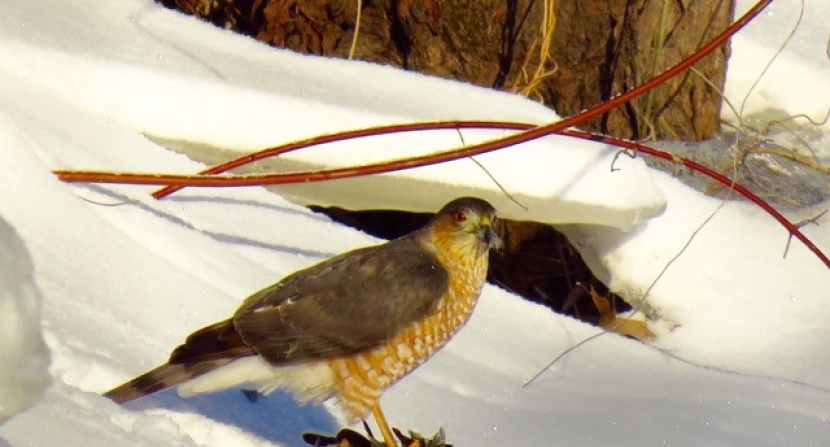 While the example of the avian food chain can be gory or disconcerting, hardy winter hawks — the accipeters including Sharp-shinned hawks and Cooper's hawks are bird-eating specialists which frequent backyard bird feeders during the winter months. Robins and Bluebirds are among migratory birds to overwinter as far north as weather and food supplies permit and thus risk falling prey to hawks and other predators.

It's a calculated risk for birds wintering in NH. Early birds risk all to overwinter in exchange for the opportunity to get an early headstart migrating north. 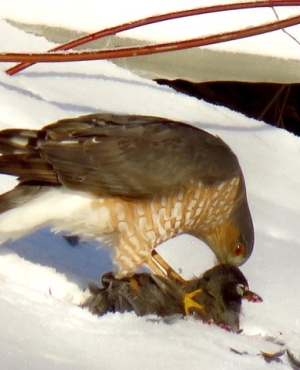 Redwing Blackbirds, Robins and Bluebirds may be considered harbingers of spring, yet both have remained in NH all winter, particulary in the southern half of the state where birdfeeders stocked with fat-rich calories of suet or mealworm and with persistent fruits on wetland shrubs provide food. Fruit and seed-eating birds can overwinter in NH while insect-eating birds will not begin to arrive until later in April and early May.

Often male birds are among the earliest to move north to staging areas throughout southern NH. If weather is conducive and food supplies ample, birds begin to move north following wetlands with fruiting shrubs and seed-leaden willow or alder catkins, sheltered areas with sun-warmed soil and open water to get closer to northern breeding territories. Taking a head start to claim the best nesting territories and thus attract females who arrive later, birders often spot the first male Redwing Blackbirds moving north in March, weeks before females arrive. Migratory bird species migrate north faster in spring and set a slower pace heading south in autumn while feeding and fattening along the way. 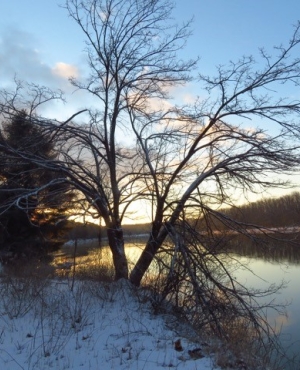 Along the Merrimack Riverbank, the fruiting native Red Mulberry Tree favored most by dozens of species of songbirds, chipmunks and squirrels in June when leaden with sweet red fruits, clings to the bank.  A special Forest Society tree-planting project this year in April of 2022 will introduce several more Red Mulberry trees to the Floodplan to perpetuate Mulberry trees on the Floodplain for wildlife and people. Stay tuned to see more about the Red Mulberry planting project this year — another hopeful tidbit of Springtime news!