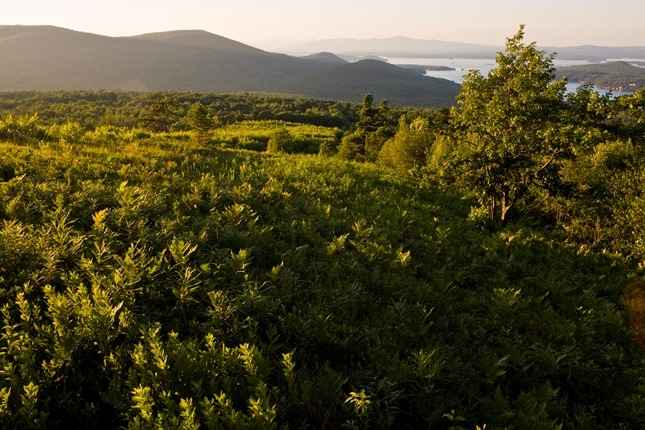 The stunning view of the Belknap Range and Lake Winnipesaukee from the blueberry pastures of the Evelyn H. and Albert D. Morse, Sr. Preserve in Alton. Jerry and Marcy Monkman / EcoPhotography photo. 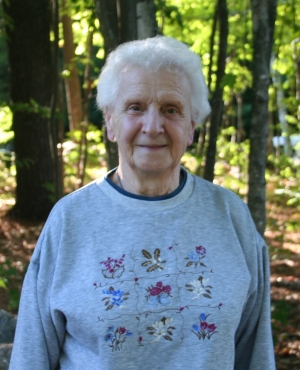 At a spry 87, this petite and energetic woman with a quick laugh and abundant funny stories remembers bringing boxes of blueberries with her father to bakeries, restaurants and stores, where they sold for 25 cents a quart.

Reminiscing in her Belmont home recently, she used her hands to show the rounded shape of the mounds of blueberries her father, Albert Morse, Sr., put into each box.

“We always used to give them a good heaping quart,” she said.

It’s the baker’s dozen philosophy -- “one more for good measure.” And it’s the spirit of Mary Jane’s donation of 25 more acres of land and a conservation easement on another 15 acres to the Forest Society to add to the 431 acres she donated in 2008.

Mary Jane’s recent donation means that her entire family farm – save the farmhouse and two acres -- is now conserved, and the Evelyn H. and Albert D. Morse, Sr. Preserve, named after her parents and given in honor of them and Mary Jane’s sister Arlene Frances, is complete. 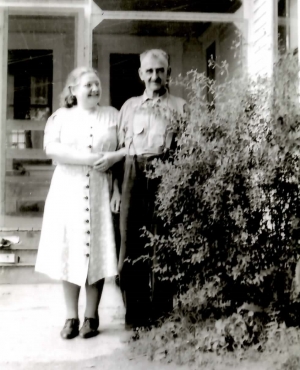 The Morse farm was begun by Mary Jane’s grandparents. Her father was born on the farm. When he was old enough to join his father in the farming business, they bought additional parcels that included pastures full of wild blueberries. The farm produced everything from vegetables to meats, maple syrup, dairy and wood products. But with the native blueberries so abundant, the father-son team also started one of the first commercial blueberry operations in the region, sending blueberries by truck and railroad from the Alton station to Boston’s Faneuil Hall Marketplace.

They maintained the two blueberry fields by burning them in rotation, so as one produced a crop the other was burned, which prompted the bushes to grow back from the roots and produce more berries.

Mary Jane’s father hired up to 20 pickers at the peak of the season. The trick at harvest time was making sure the berries didn’t get crushed. Pickers couldn’t put them into big pails or boxes where the weight of the top berries would squish the bottom berries. So they used blueberry rakes to scoop up the berries and put them into quart-sized boxes they carried with them in a special harness that balanced on their shoulders like an ox’s yoke.  A tray on either side held eight boxes each. 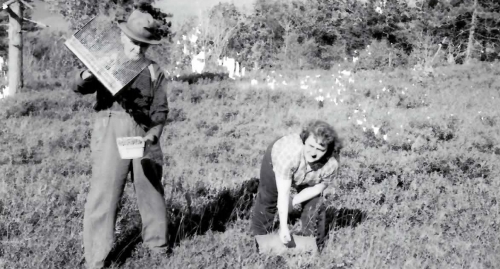 As a child, Mary Jane was a fast picker and her father’s secret productivity booster. When he noticed that the pickers, mostly neighbors, were slowing down and maybe enjoying the scenery a little too much, he would call Mary Jane and say, “I think it’s time for you to go up.”

Little Mary Jane would head up to the field and start picking. Soon her dad would call out to ask how she was doing, and she would shout – loudly, so everyone would hear – that she just had a bit more to do before all of her boxes were full.

“That got them going again!” Mary Jane said with a laugh. “You didn’t have to tell them – they weren’t about to let a girl beat them.”

Mary Jane helped on the farm along with her brothers and sister. She and her sister Arlene helped her mother Evelyn with all of the chores that come with a highly productive farm, like butter churning and canning – 500 to 600 jars each season.

“We were pretty old before my sister and I realized we were working and not ‘having fun,’ Mary Jane said.

Mary Jane vividly remembers her parents’ generosity and spirit of hospitality that made the Morse farm a hub of the community. Her father was asked to be a selectman, and he obliged. Every Friday was pay day, and during the blueberry season all the farm workers were invited to a cookout at the end of the day to get a meal along with their paycheck. On holidays, Mary Jane or Arlene was sent to neighbors’ and farm workers’ homes with meals and extra farm goods her mother carefully packaged up.  The table was often set with an extra spot for guests. Her father built camps for wood cutters from Canada to live in, and her mother made a habit of inviting the workers for dinner.

“She’d say, ‘If you’re here around meal time, you just come right in.’ Well, they were around a lot at meal time! One more never mattered,” Mary Jane said.

Evelyn was trained as a registered nurse, and perhaps that’s where she honed the listening skills and pragmatism as a mother that Mary Jane remembers. “She would listen to your story, but then she’d say, ‘Now tell me the truth’,” Mary Jane said. 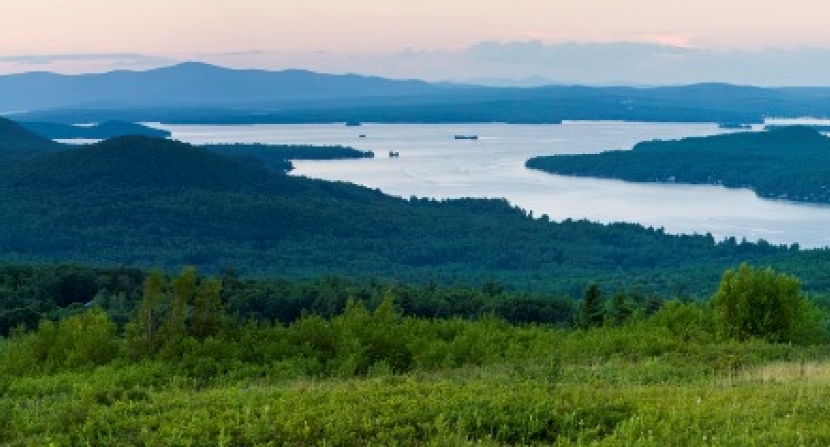 Admitting to being somewhat impetuous as a child, Mary Jane recalled the time she got fed up with a classmate’s ceaseless teasing. So one day after school, she whacked him over the head with her lunch pail. Upon arriving home, her mother asked her what happened to her dented lunch pail and she said, “I don’t know.”

Well, the next day the bus driver filled in all the details for her mother, but he also told her the boy had it coming. On the one hand, Mary Jane’s mom was proud of her for sticking up for herself, so they went down to the store and bought a brand new lunch pail. On the other hand, the lie couldn’t be condoned. Her mother put the new pail up on a shelf.

“It was taken away for a whole week because I lied,” Mary Jane said.

Mary Jane lived on the farm until going to Maine for college and getting a job as a dietitian in New York. She returned after her mother died.

“I knew Dad needed me, so I quit and moved back to the farm,” she said.

She stayed until marrying later in life and moving to Belmont, N.H., with her new husband Bob Greenwood. When her father died in 1964, he entrusted the land to Arlene and her. When Arlene died, the responsibility for the land became all hers, and that responsibility weighed heavily because of her desire to keep the farm intact in honor of her parents, the wonderful childhood they gave her and the beauty of the place.

“We felt we were as close to Heaven as we could be without being in Heaven,” Mary Jane said.  “My mother and father did so much for so many and they worked so hard.”

Sharing was such a big part of her parents’ lifestyle that Mary Jane wanted to do something with the land that would keep it open for others to enjoy.
“I just didn’t want a developer to come in or a wealthy person to come in and buy it for their own estate. The spot was so beautiful we had to have something done to take care of it,” she said.

Mary Jane and her husband had been talking about what to do with the land for years when one day she made a decision. “I woke up one morning and said, ‘Bob, why don’t we donate that land?’  He said, ‘You want to donate that land?’ I said, ‘Yes, how about it?’ He said, ‘Call up (the lawyer) and do it now!’ ”

Their lawyer knew the Forest Society and its work and soon the Evelyn H. and Albert D. Morse, Sr. Preserve was created. That was 2008, and the Forest Society has been caring for the land and mowing to keep the blueberries producing ever since.

“The Forest Society was there when I needed a solution and has been so good to me,” Mary Jane said.

Now many visitors spend time on the Morse Preserve, feeling the fresh Pine Mountain breeze and taking in the breathtaking vista of the big lake and the Belknap Mountains… Major, Straightback, Belknap, Gunstock. Families go there to pick berries together, talking about the pies they’ll bake and taking pictures, making great memories like Mary Jane did before them. And now her memories are settled with the knowledge that she has faithfully protected all of the land in a way she feels her parents would have wanted.

When she hears of visitors deeply appreciating that a place as beautiful as the Morse Preserve is open to them because of her family’s generosity, she struggles to find the words that could describe how she feels. So during our recent visit she just pointed to her tear-filled eyes and said, “Proud… tears…” and then shook off the tears to smile.

“I am so thankful,” she said. “If I had a chance to live my life over, I would say yes, I want my life over. That’s a pretty good feeling.” 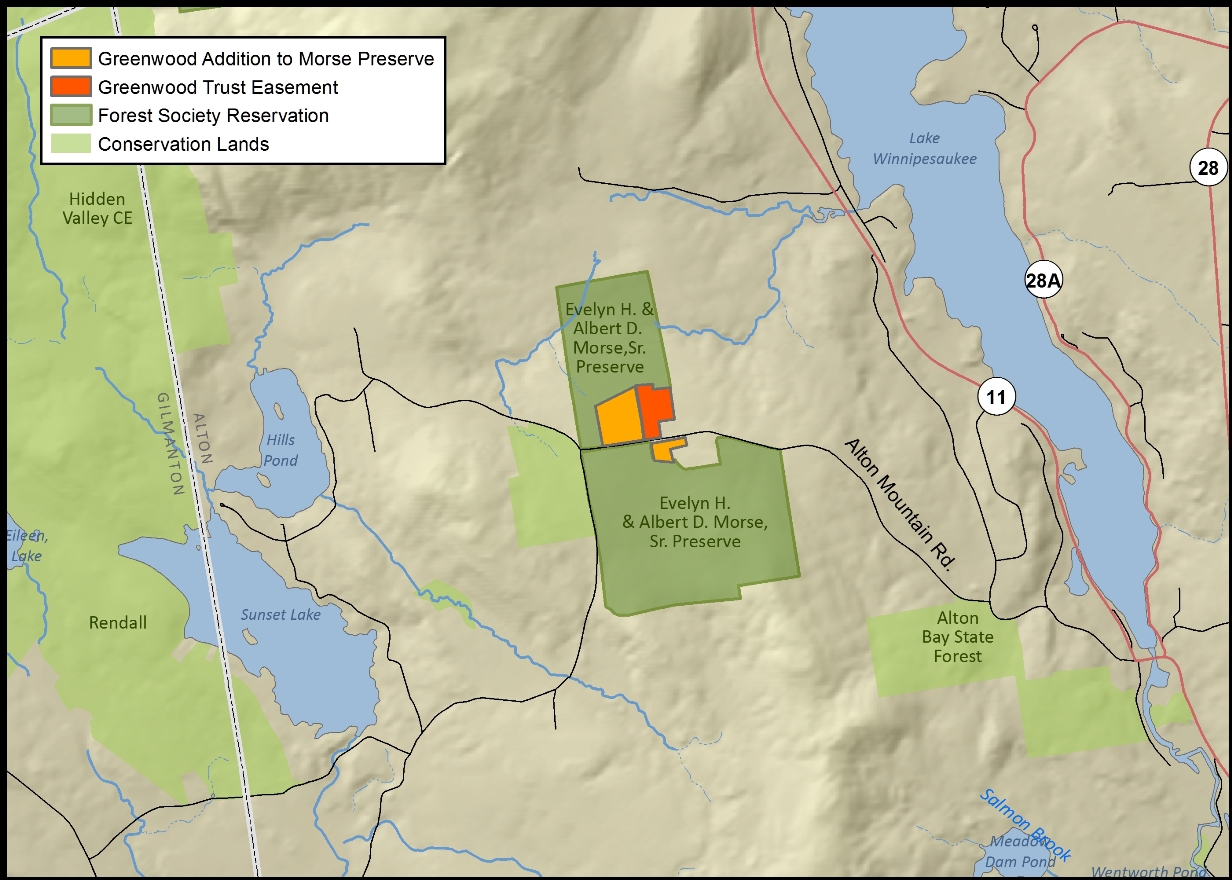