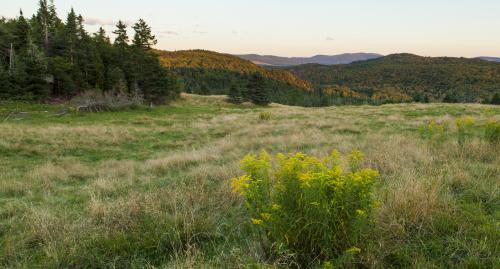 McAllaster Farm. photo by Jerry & Marcy Monkman/EcoPhotography
Our energy future and our climate are linked at the hip.  How we generate and consume energy today and beyond will determine the climate our children and grandchildren inherit.

Forests play an elemental role in the removal of carbon dioxide from the atmosphere.  Each year standing American forests store as much as 17% of all man-made carbon dioxide emissions released into the atmosphere in America.  Forests that are sustainably managed --- where total annual harvest does not exceed total annual growth --- help reduce total carbon loading of the atmosphere by storing carbon as trees continue to grow.  Emerging carbon markets that reward landowners storing carbon in their forests may begin compensating for ecological services that woodlands have long provided at no cost.

The 2014 National Climate Assessment tells the story of how climate is changing globally, and how humans are contributing to the change.  It details how consumption of fossil fuels alters the Earth’s natural systems, from the polar regions to the Equator.  It provides regional assessments of changes and how we can adapt to them.

More locally, the Forest Society was one of 27 participants in former Governor John Lynch’s Climate Change Task Force.  The 2009 report of the Task Force, called the NH Climate Action Plan includes 67 specific recommendations for how the State and its citizens can reduce consumption of greenhouse gas fuels and adopt changes in land use that serve the larger goals of wise and lower energy consumption without compromising our high quality of life.

The Forest Society supports regional energy and climate policies like the Regional Greenhouse Gas Initiative and statewide policies such as the NH Renewable Energy Act to advance a cleaner energy future. We support reforms to the New Hampshire Site Evaluation Committee (SEC), which decides whether to permit new large energy facilities. We support appropriately sited commercial wind energy facilities in the state, and we also are not opposed to the importing of Canadian hydro power as long as transmission lines are buried in previously disturbed corridors (such as transportation rights of way that can appropriately host such infrastructure).

Low grade timber will continue to play a role as a renewable fuel in the New Hampshire energy marketplace.  Wood Energy works when the fuel itself comes from sustainably managed forests.  We strongly support amendments to the NH Renewable Energy Act which create incentives for wood used for thermal energy --- particularly when it replaces fossil fuels like oil and gas.