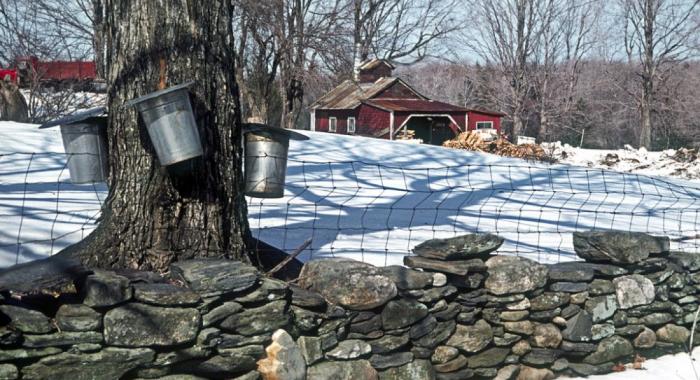 Maple time in New England brings out the essence of the trees and the character in the people. For those who love trees, a tongue-tip taste of fresh maple syrup is a sacrament, maple communion at the end of a long winter.

Like much of the region, the slopes of Barton Hill were cleared for farm pastures and timber by the mid 1800s. The abandonment of hill farms allowed this land to gradually revert to a forest of poplar, white birch, and pine.

The land is part of the estate that was owned for generations by the Wright family of Keene, which made its fortune in silver polish. Legend has it that John Wright’s first silver polish was developed in the late 1800s as the result of an accidental encounter with a cow on a muddy back road. Finding the cow mired in a bog, he enlisted a local farmer to free the animal. As he wiped dried mud from the cow’s bell, Wright discovered that the bell was brighter, as if it had been polished. He purchased the land containing the mud, part of which became known as Silver Mountain.