Many Faces of Conservation 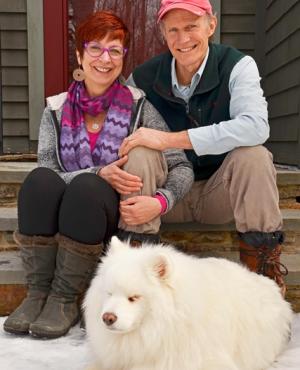 Rick and Wendy Van de Poll with Marley. Photo by Jeremy Barnaby / picturenh.com
“When the first highway crossed my grandparents’ land I was four. When the interstate went through I was 13. In the face of “progress” many things fell by the wayside, like crystal-clear springs, hay fields, horse pastures, and the best raspberry patch around. What didn’t fall away was the love of land.

Years later, when Wendy and I first thought about conserving our 55-acre piece of ‘photo scenic’ New Hampshire, we naturally turned to the Forest Society. They had been in the business of land protection for nearly 100 years at that time, and offered the greatest expertise of any land conservation organization around. What we like is that the Forest Society not only protects land but is holistic in their approach to land conservation. They do this by training young naturalists, managing tens of thousands of acres of working timber land, protecting some of the best habitat in the state, and advocating a positive balance between progress and preservation. When it comes to their “LEAF” (Land Protection, Education, Advocacy, Forestry) model, we can’t imagine a better organization in the state to uphold that mission.” 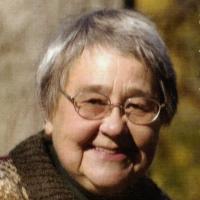 "As a child growing up in New Jersey, I looked forward each year to vacationing on my grandfather's farm in Farmington, N.H. Its 340 acres were first settled around the time of the Revolution and came to my family 100 years ago, so I've always felt a part of its history, and this has inspired my interest in its conservation.

The cows are long gone, but the trees remain. Living in Boston, I knew nothing about forestry or land management when the property became my responsibility. In 1992 a friend guided me to the Forest Society, and it has been both a surce of help and an inspiratin through its courses and publications. Encouraged by its staff to undertake a major timber harvest, I saw the forest opened up, and it became a certified Tree Farm. Fields were cleared and crabapple trees planted to attract turkeys and other wildlife, which are now flourishing. With the creation of trails, hikers and hunters now enjoy the land, and the Boy Scouts have used it for a District Camporee.

All of this has given me great satisfaction, and I hope to preserve this oasis of nature for the use and enjoyment of future generations." 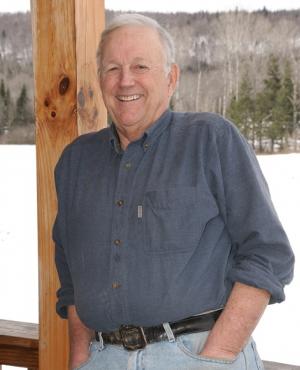 Photo by Jeremy Barnaby / picturenh.com
"My relationship with the Forest Society began back around the early 1970s. I was employed by the US Forest Service and working in the White Mountain National Forest as the Wildlife and Fish Program Leader. The Forest Society asked me to help review an Environmental Impact Statement regarding a mining proposal for Umbagog Lake. We wrote up quite a number of concerns about that proposal, and our efforts paid off: The mining project fell through.

I left the White Mountain National Forest in 1994 to join the N.H. Fish and Game Dept. as their State Lands Manager. In that role, I continued to work with the Forest Society through programs to help land owners manage their lands. The Forest Socety understands the connection between land protection and forest management, and how forest management is an extremely important tool for creating and maintaining wildlife habitat.

Now that I've retired, I figured that one good way to keep in touch with the Forest Society was to place a conservation easement with them on my land. Well, we are in touch for sure. They come up to monitor the land on occasion.

Now there is this proposed Northern Pass project. As we did 40 years ago with that plan to mine Umbagog Lake, we are teaming up once again, along with many others, to try to avert the adverse consequences that Northern Pass would have for all of us if allowed to go forward. When the Forest Society gets involved in things like Northern Pass, you know they've thought about it for a while. They aren't wasting resources on trivial stuff. You know they're serious.

So it looks as though my relationship with the Forest Society is just going to continue on as if it had a life of its own for the foreseeable future. As far as I'm concerned, that's a really good thing."